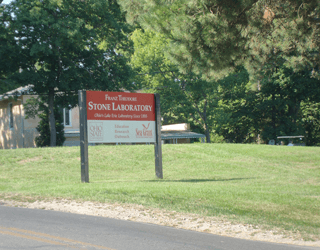 Once a state fish hatchery, the Aquatic Center is operated by the Division of Wildlife. They strive to provide a fun and enriching experiencing through their educational displays pertaining to Ohio's fishing resources. There are live fish displys of Lake Erie fish, as well as extensive information about the creatures. 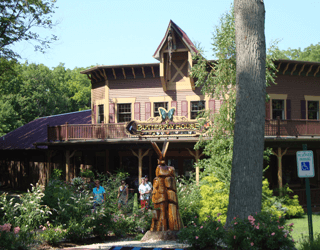 Come and basque in the whimsical feelings you'll get as over 500 exotic butterflies flutter above your head. Bring the whole family to enjoy this island favorite, located in the Perry's Cave Family fun Center. Also be sure to check out their great gift shop with unique gifts and novelties. 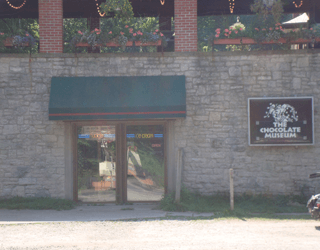 Chocolate, chocalate, and more chocalate! Also they have clothing, glassware, and special items in their gift shop. Of course there is an extensive selection of chocalates, candies, and ice cream. Coffee and breakfast sandwiches are also served daily in this great pudding bay cafe. Located on Catawba Rd beneath the Goat Soup & Whiskey. 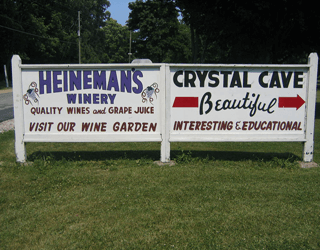 Workers in 1897 stumbled upon this marvel as they were preparing a well for the winery some 40 feet above. Put-in-Bay's Crystal Cave has the world's largest geode inside. The inner lining of this Ohio treasure is covered in strontium sulfate, a bluish mineral classified as celestite. Crystals have been harvested previously for firework production, so the cave has grown considerably since its discovery. 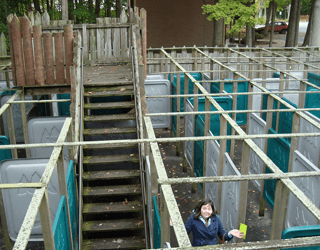 Stroll through this challenging attraction, but just make sure you watch your steps. A fun activity for the whole family, Fort Amaze'N at the Perry's Cave Family Fun Center will have you spinning with glee. The maze has panels that can be removed and altered, so new fun can be found every time. Come down and see who can make it through! 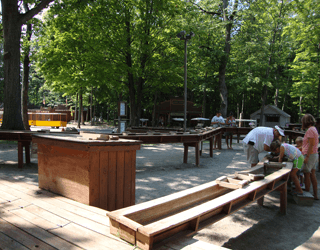 Get a bag of rough mix at Perry's Cave gift shop, and start sifting. Water will push the sand through the grates, and if you are lucky you may found a great treasure. Bags cost from $4-9, and a great time will be expereinced from 10 minutes to an hour of sifting through the mixture. Check out this Put in Bay fun spot! 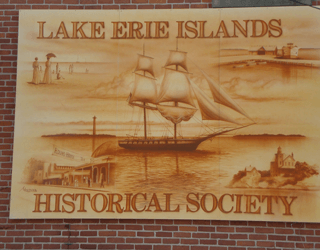 Preserving the Lake Erie islands was a central focus in the 1975 formation of this organization. Their mission is to preserve, interpret, and educate islanders and visitors about the rich culture and history that is found on Put-in-Bay and the surrounding islands. All ages are welcomed to this edutainment experience. 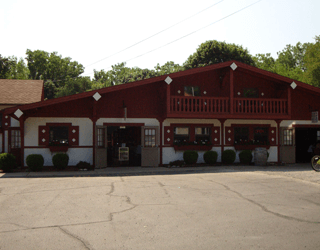 The Heineman Winery was founded in 1888 by Gustav Heineman, an immigrant from Baden-Baden, Germany. This area is well known for growing grapes. The Lake Erie Islands are located along the same latitude lines of the wine making regions in France. The long growing season and temperate environment were very suitable for grape growing. Over 100 years of wine making tradition can be experienced at this PIB must visit. 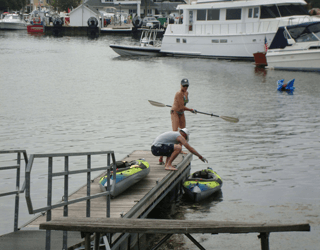 Navigate the gently rolling waters of Lake Erie catching unparallelled views of Perry's Victory & International Peace Memorial. Experience is not neccessary, as their trained staff will be very accomadating to new riders. Paddle the harbor and check out the great vistas and limestone cliffs that surround Put in Bay. 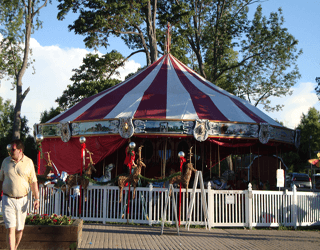 Wooden horses adorn this great American merry-go-round. There are few left in operation of this sort due to the common breakdown of the intricately carved pieces of art. The carousel is located in downtown Put in Bay near the Candy Shop. Orginally built in North Tonawanda, New York by Allan Hershcel, this attraction will leave the kids smiling!

The Ohio State University operates the United States oldest freshwater biological field station, here on the western shore of Put-in-Bay. There is also an extension campus of OSU, where college students, adults, and children can become educated about the waters that surround PIB. The Ohio Sea Grant College Program hosts a Lake Erie teaching component. Don't miss this informative attraction. 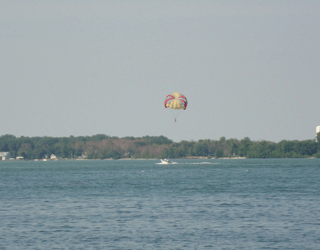 Fly high in the sky and get the best view of the Lake Erie Islands possible! Climb upon their boat and take off for a special putinbay experience. From 600 feet in the sky you will be able to feel like a sea gull spanning the shore. You stay dry throughout, as you depart from the flight deck from the rear. Come and get really high with us! 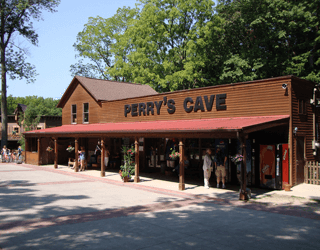 Perry's Cave, registered as on Ohio Natural Landmark, is a NATURAL limestone cave steeped in historical tradition. The cave lies 52 feet below the surface of South Bass Island in Lake Erie. The discovery of the cave, in 1813, is credited to Commodore Oliver Hazard Perry, hero of the battle of Lake Erie. The cave is 208 feet long by 165 feet wide; the walls, ceiling and floor are heavily encrusted with calcium carbonate deposited by centuries of water dripping from the ceiling. The temperature remains in the vicinity of 50 Degrees.

An Ohio Natural Landmark, Perry's Cave is the location where Oliver Hazard Perry found fresh drinking water for himself and his men. The cave lies 52 feet beneath South Bass Island's surface. The dimensions are 208 feet long by 165 feet wide with the ceiling and floor encased with calcium carbonate. Dripping water from the ceiling has produced this element. Year round the cave remains a temperate 50 degrees. 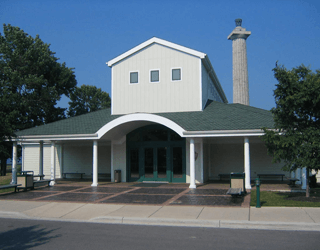 Erected to remember those who were involved int he Battle of Lake Erie during the war of 1812. There is a dual purpose which also commemorates the lasting peace between Britain, Canada, and the U.S. This monument is perched just 5 miles from the longest continuous unprotected border in the world. Construction began in October 1912, and was finished 3 years later. Guests can catch great views from the observation platform, and even see Canada on a clear day!
Open on March 25 - weekends only (Fri - Sun) Hours 10-5
April 22nd - open seven days a week; Hours 10-5
May 27 - September 4th, Hours 9am - 7pm
September 5th - October 23, Hours 10-5 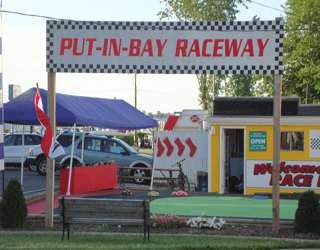 Vroom, Vroom! Come down and challenge a friend to Put-in-Bay's most exhilarating, adrenaline filled speed spot. There is a 1:10 scale with 2 and 1/2 minutes of great racing action. The racers travel at speeds higher than 50 miles an hour. This is much faster than you can travel on anywhere on the island! Get your racing fix at the Put-in-Bay Raceway. 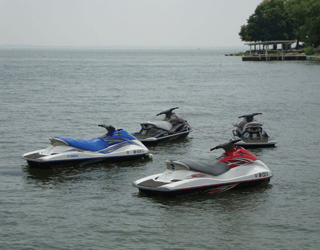 What would complete your stay at the bay? A jet ski ride! Put in Bay Watercraft Rentals, Inc. offers a variety of water activities including kayaks, waverrunners and power boats. Located next to the South Bass Island State Park, spectacular views of Lake Erie can be found here. Check out the sunset here early in the season. A must see! 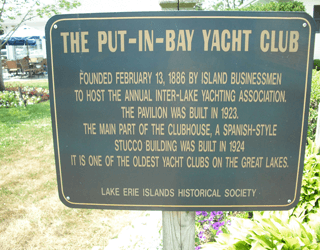 The Put-in-Bay Yacht Club (PIBYC) is situated on South Bass Island on the western shore of Lake Erie. Yachting, power boating, sailing, and other aquatic sports are promoted with great dedication. There are great annual events including cruise outs, parties, picinics, and other social gatherings. PIBYC is a member of the Associated Yacht Clubs (AYC), and annually hosts the Inter-Lake Yachting Association. (I-LYA) 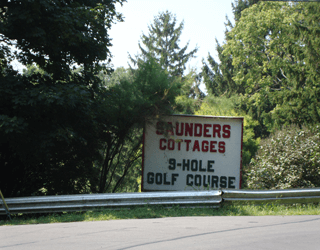 Primely situated next to South Bass Island State Park, this par 3, 9 hole course is a great stop for the golf enthusiast. There are 1,235 yards of golfing glory from the black tees, with a par of 30. The slope rating is 150 and the course overall is rated as a 35. Opening in 1956, Delores Kowalski currently manages this PIB course that she also owns. 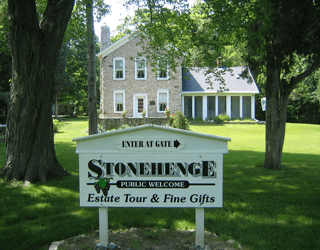 Nicely situated on seven acres of woods and inviting landscaped grounds, the Stonehenge Estate illlustrates examples of island life from the 1800's through present day living. A continued family preservation project, the wine making tradition that enriched the area in the mid 1800's is on clear display here. The Stone Farmhouse and Wine Press Cottage are both listed on the National Register of Historic Places and can be toured during the summer months. 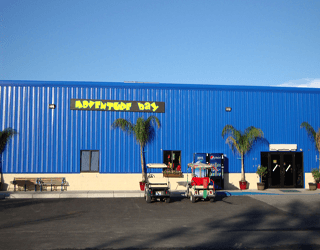 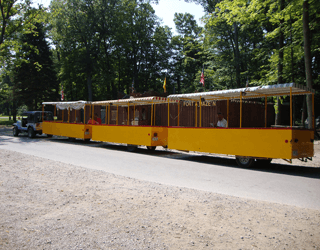 Glide through the streets of Put-in-Bay with a narrated tour. Offered daily through the summer season, the train leaves from The Depot in downtown Put in Bay every hour. The driver informs passengers about the rich history and tradition that is found on Put-in-Bay and the Lake Erie Islands. Enjoy this 55 minute tour to learn more about South Bass Island. 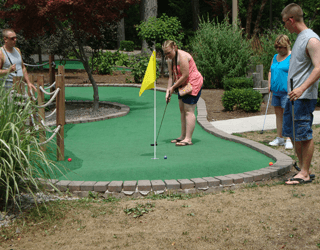 Wage war on the putting green at this fun filled attraction. Located within the Perry's Cave Family Fun Center, an 18 hole putt-putt course awaits to challenge the best of players. The theme is inspired by the events that transpired with Oliver Hazard Perry in 1812, as well as island inspired holes. A great shaded lot houses this great activity.